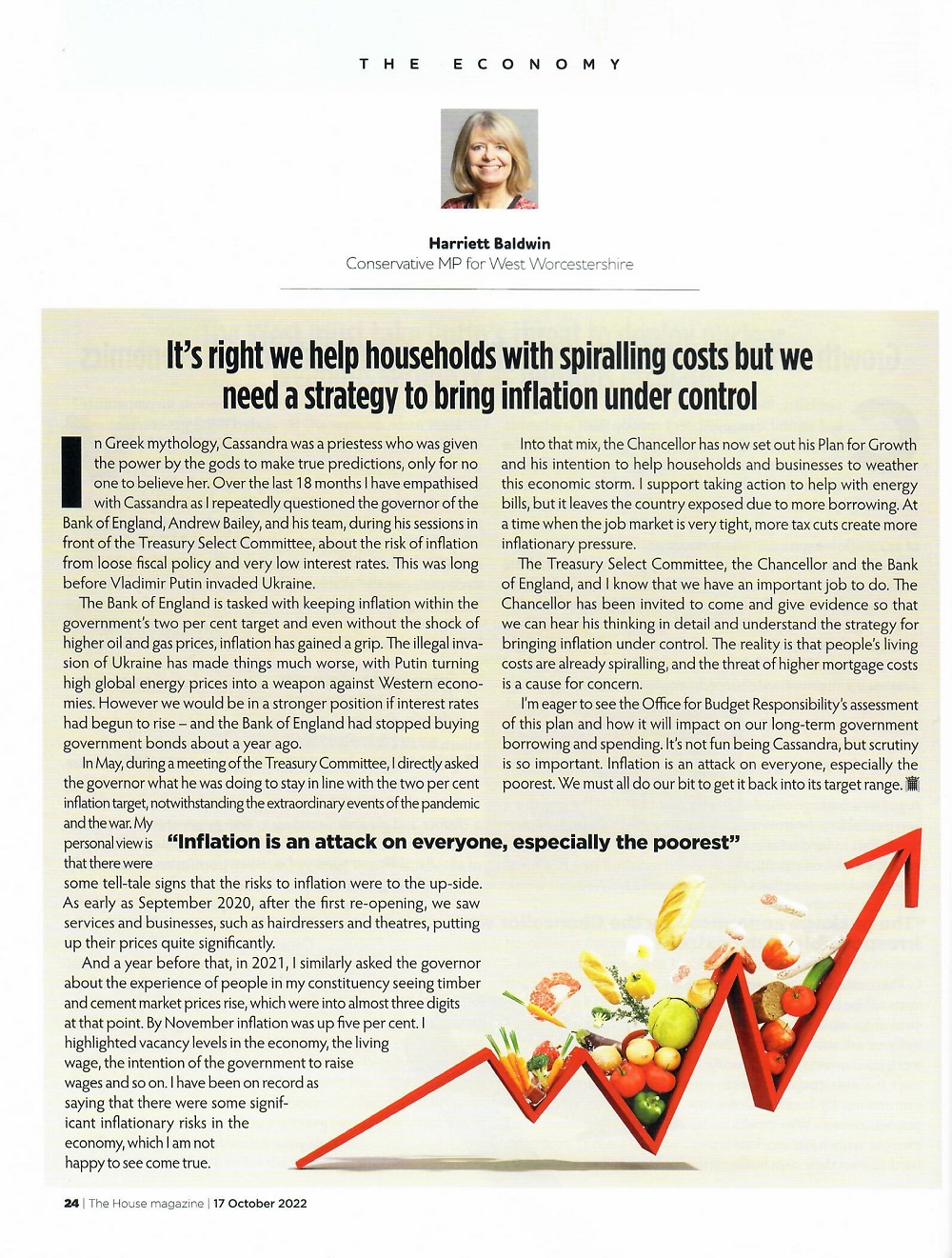 In Greek mythology, Cassandra was a priestess who was given the power by the gods to make true predictions, only for no one to believe her.

Over the last 18 months I have empathised with Cassandra as I repeatedly questioned the governor of the Bank of England, Andrew Bailey, and his team, during his sessions in front of the Treasury Select Committee, about the risk of inflation from loose fiscal policy and very low interest rates. This was long before Vladimir Putin invaded Ukraine.

The Bank of England is tasked with keeping inflation within the government’s two per cent target and even without the shock of higher oil and gas prices, inflation has gained a grip. The illegal invasion of Ukraine has made things much worse, with Putin turning high global energy prices into a weapon against Western economies. However we would be in a stronger position if interest rates had begun to rise – and the Bank of England had stopped buying government bonds about a year ago.

Inflation is an attack on everyone, especially the poorest.

In May, during a meeting of the Treasury Committee, I directly asked the governor what he was doing to stay in line with the two per cent inflation target, notwithstanding the extraordinary events of the pandemic and the war. My personal view is that there were some tell-tale signs that the risks to inflation were to the up-side. As early as September 2020, after the first re-opening, we saw services and businesses, such as hairdressers and theatres, putting up their prices quite significantly.

And a year before that, in 2021, I similarly asked the governor about the experience of people in my constituency seeing timber and cement market prices rise, which were into almost three digits at that point. By November inflation was up five per cent. I highlighted vacancy levels in the economy, the living wage, the intention of the government to raise wages and so on. I have been on record as saying that there were some significant inflationary risks in the economy, which I am not happy to see come true.

Into that mix, the Chancellor has now set out his Plan for Growth and his intention to help households and businesses to weather this economic storm. I support taking action to help with energy bills, but it leaves the country exposed due to more borrowing. At a time when the job market is very tight, more tax cuts create more inflationary pressure.

The Treasury Select Committee, the Chancellor and the Bank of England, and I know that we have an important job to do. The Chancellor has been invited to come and give evidence so that we can hear his thinking in detail and understand the strategy for bringing inflation under control. The reality is that people’s living costs are already spiralling, and the threat of higher mortgage costs is a cause for concern.

I’m eager to see the Office for Budget Responsibility’s assessment of this plan and how it will impact on our long-term government borrowing and spending. It’s not fun being Cassandra, but scrutiny is so important. Inflation is an attack on everyone, especially the poorest. We must all do our bit to get it back into its target range.